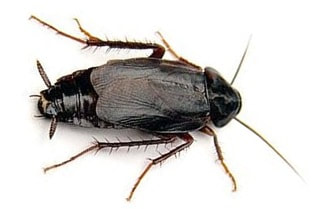 Shiny black to a dark reddish-brown color, oriental cockroaches are a pest invader that most frequently gains entry beneath the thresholds of doors, through open doors or gaps beneath siding, even following utility lines, pipes, open drains or sewers into a structure or home. The adults of the oriental cockroach are very different in appearance. The smaller adult male oriental cockroaches, reaching only a length of 25 mm, can be identified by the presence of three-quarter-length wings, leaving the last few abdominal segments exposed. The larger adult female oriental roaches, reaching a length of 32 mm, on the other hand, lack wings altogether, having only large wing pads that cover the first couple of segments of the body. Neither the male nor female is capable of flight.

​Behavior, Diet & Habits
Primarily an outdoors species, oriental cockroaches are well adapted for surviving in the natural environment. Most outdoor populations can be found living beneath the mulch in landscape beds, in leaf litter, beneath stones or debris outdoors. If access is available, the insects can thrive in the voids or openings beneath porches, in wall voids and crawlspaces. In more metropolitan areas, oriental roaches can be found in large numbers living in storm drains and sewers.

Oriental cockroaches are known for their preference of feeding on garbage, filth or material that has begun to decay. These cockroaches are very dependent upon water. While studies have shown that they can survive for up to a month without food, these insects can not survive for more than two weeks without water.

Reproduction
On average an adult male oriental cockroach will live 110 to 160 days, whereas the adult female can live anywhere from 35 to 180 days. During that time, a single female oriental roach can produce approximately eight egg cases, or ootheca, with approximately 16 eggs per case. Approximately 30 hours after she has produced the egg case, she will drop it in a protected area where it will stay until the young hatch. The development time for the oriental cockroach is greatly affected by the season. In the warmer months, the time needed to develop from an egg to an adult may take as few as 200 days. However, when the weather becomes colder, or during the late fall and winter months, it can take as many as 800 days for the cockroaches to go from egg to adult.

Signs of an Oriental Cockroach Infestation

Sightings
During the warmer months, it is not uncommon to find oriental roaches outside around landscaping beds, congregating beneath moist gutters, or even scurrying out from storm drains and sewer grates at night. Mostly active at night, they can be found during the day in areas and rooms that are kept primarily moist, dark and undisturbed.

Egg Capsules
Egg cases of the oriental cockroach may appear dark brown or reddish in color and almost 8 to 10 mm in length. Each egg case, which can hold approximately 16 eggs, is dropped by the female into protected areas, almost 30 hours after it is produced.

Odor
In areas where large populations of oriental cockroaches are present, a musty odor can be detected. This odor is a result of chemicals that are secreted by the insects that are used to communicate within the population.