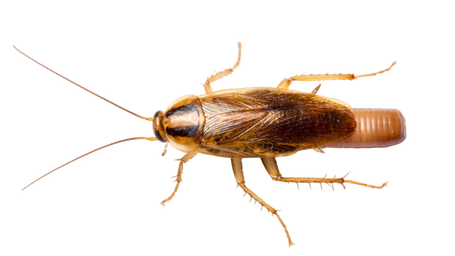 Identify German Cockroaches
​
​German cockroaches are well-known indoor cockroaches with a distribution that is world-wide. Adults are easily recognized by their light brown or tan coloration with two black horizontal stripes located on the pronotum immediately behind the head, and growing to a length of 13-16 mm. The much smaller young, or nymphs, are darker, almost black in color, also with the black stripes behind the head.

​While adult German cockroaches have wings, they rarely fly, preferring to run.

Behavior, Diet & Habits
Although capable of living outdoors in tropical environments, German cockroaches are most commonly found indoors, with a preference for the warmer and more humid areas of a structure. In homes, these insects will typically be found in kitchens and bathrooms, but can move to other areas of a home if food and moisture are available.

In most cases, German cockroaches are introduced into a structure or residence when bags, boxes or cardboard containers are brought into the home. They may even be brought in with used appliances. In multiunit apartment buildings, German cockroaches can easily move between units, using the shared plumbing and pipes as a highway.

German cockroaches are scavengers, capable of feeding on most any food source available, including toothpaste, soap and the bindings of books. These pests are known for their ability to capitalize on the availability of even the smallest amounts of food by feeding on crumbs missed during cleaning or feeding on the dirty dishes left in the sink overnight.

Reproduction
German cockroaches are known for their ability to reproduce quickly. Female German cockroaches only need to mate once for the production of young. After mating, and under normal conditions, they will produce, on average, 4 to 6 egg cases during the course of their lives, with each egg case, or ootheca, containing approximately 30 to 40 eggs. This egg case is then carried by the female until 1 to 2 days before hatching. Depending upon the conditions, the average time for development, from egg to adult can range from 54 to 215 days, with an average of approximately 100 days. As adults, German cockroaches can survive anywhere from 100 to 200 days.

​Signs of a German Cockroach Infestation

Droppings
German cockroach droppings may appear as small, dark, “pepper-like” material left on countertops or in drawers. Fecal staining may appear as dark spots or smears, some that are slightly raised, in the corners of rooms, along the tops of doors or around small cracks and openings into walls.

Egg
CapsulesSince German cockroach females carries their egg case until 1 to 2 days before depositing it, empty egg cases may be found in areas that the females frequent.

Odor
German cockroaches are also known to secrete a number of odorous compounds. When populations are present in large numbers, it may be possible to detect a mild, or what some have reported as a “musty” odor.